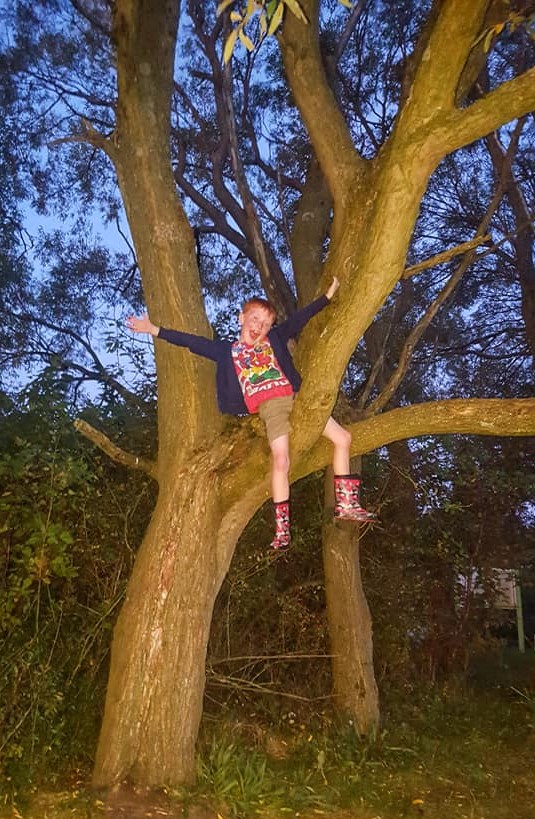 During Children’s Mental Health Week, we’re using the VICTA Parent Portal to raise as much awareness around the topic as possible, to ensure that the conversations that need to happen – happen.  We need to end the stigma attached to the subject, no matter how sensitive the subject may be.

As the former Through Scarlett’s Eyes writer, I have spoken considerably about my daughter on a variety of topics, the good the bad and the ugly!  I have previously spoken about how the process of writing, sharing and discussing has been pivotal in addressing my own mental health issues, in relation to Scarlett’s visual impairment.  I have also written extensively about how Scarlett’s very unique combination of needs and conditions have created this happy little bubble in which she exists.  Her awareness is not what you would consider ‘normal’. She hasn’t got the level of comprehension required to know that she is blind.  Therefore, in terms of Scarlett’s mental health, her happy bubble just drives it.  She prevails in her own little world – an elated one at that.  In a sense, she encompasses the phrase “ignorance is bliss”. I’m not saying that she is ignorant. She just doesn’t identify as blind or disabled OR with having additional needs. That leads to a blissful existence! 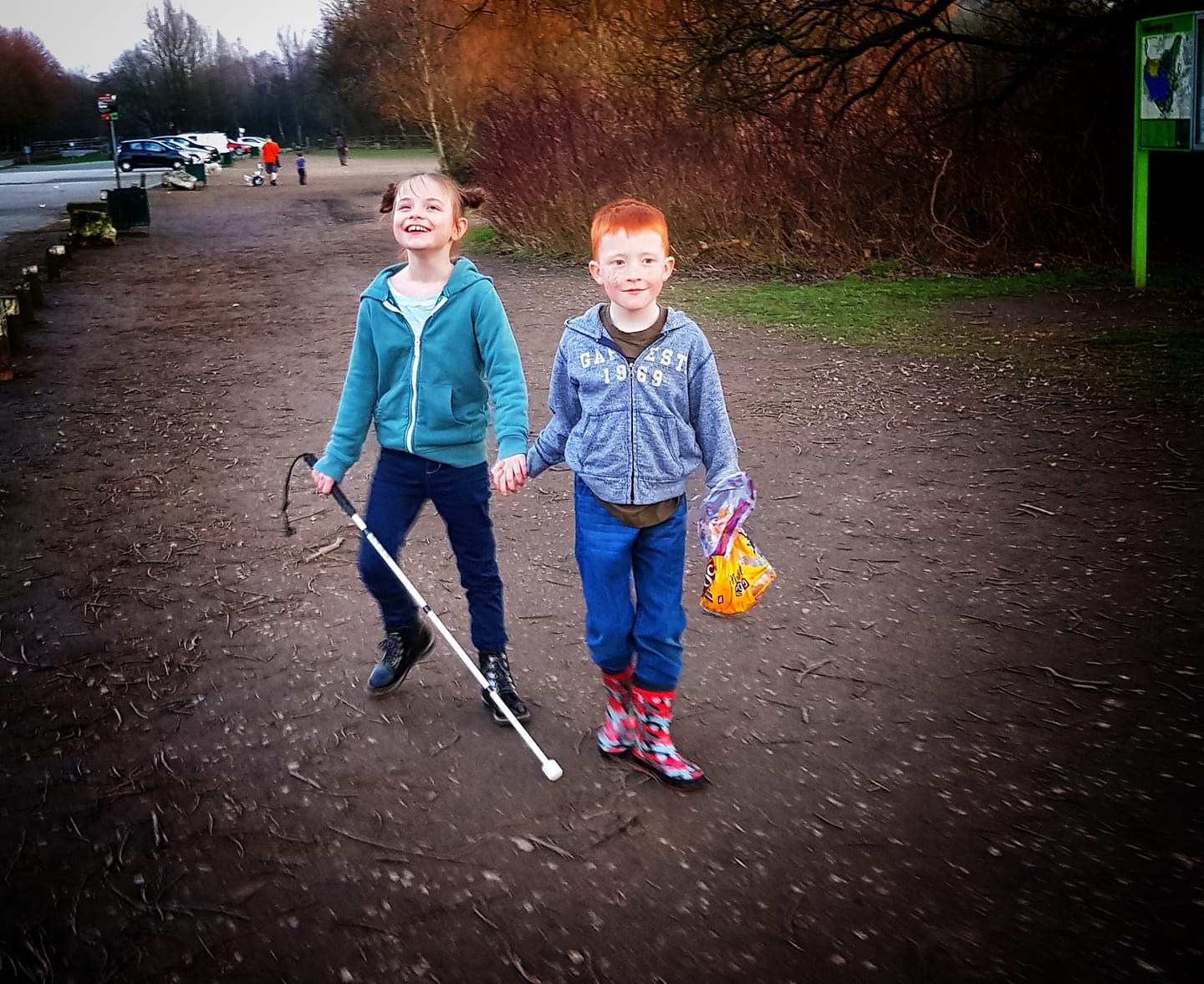 There isn’t just me and Scarlett in our family. I’m the ridiculously proud mother to eight-year-old Sonny. The two children are exactly 368 days apart in age and he completed our family unit.  Sonny has no additional needs but understands that Scarlett is different in the sense that she is unable to see anything and that she has learning difficulties.  It was always just a matter-of-fact type situation with Sonny. He wasn’t particularly inquisitive about it. He just accepted it and carried on as if there was no big announcement or anything bad or wrong with Scarlett. Scarlett is Scarlett and that was that.

As Sonny has got older, like all children, he has become more curious and aware of the world around him. This makes him more susceptible to outsiders’ perceptions and reactions to Scarlett. What I like to affectionately refer to as her Scarlett-isms. Whether it be her singing, flapping, giggling or rolling around, she outwardly demonstrates her differences without realising she is doing so.  People do look and react. I’ve overcome getting upset by people’s lack of decorum now (well on most days).  I thought for many years that it was my job as the mummy to take any kind of discriminatory looks or comments on the chin for us both. In fact, I am happy that her bubble also acts as a shield for my little girl. I wouldn’t even know where to start building her resilience against it when it is something I find hard to do myself.

I never spared a second thought on how Sonny’s mental health could be affected by Scarlett’s visual impairment. 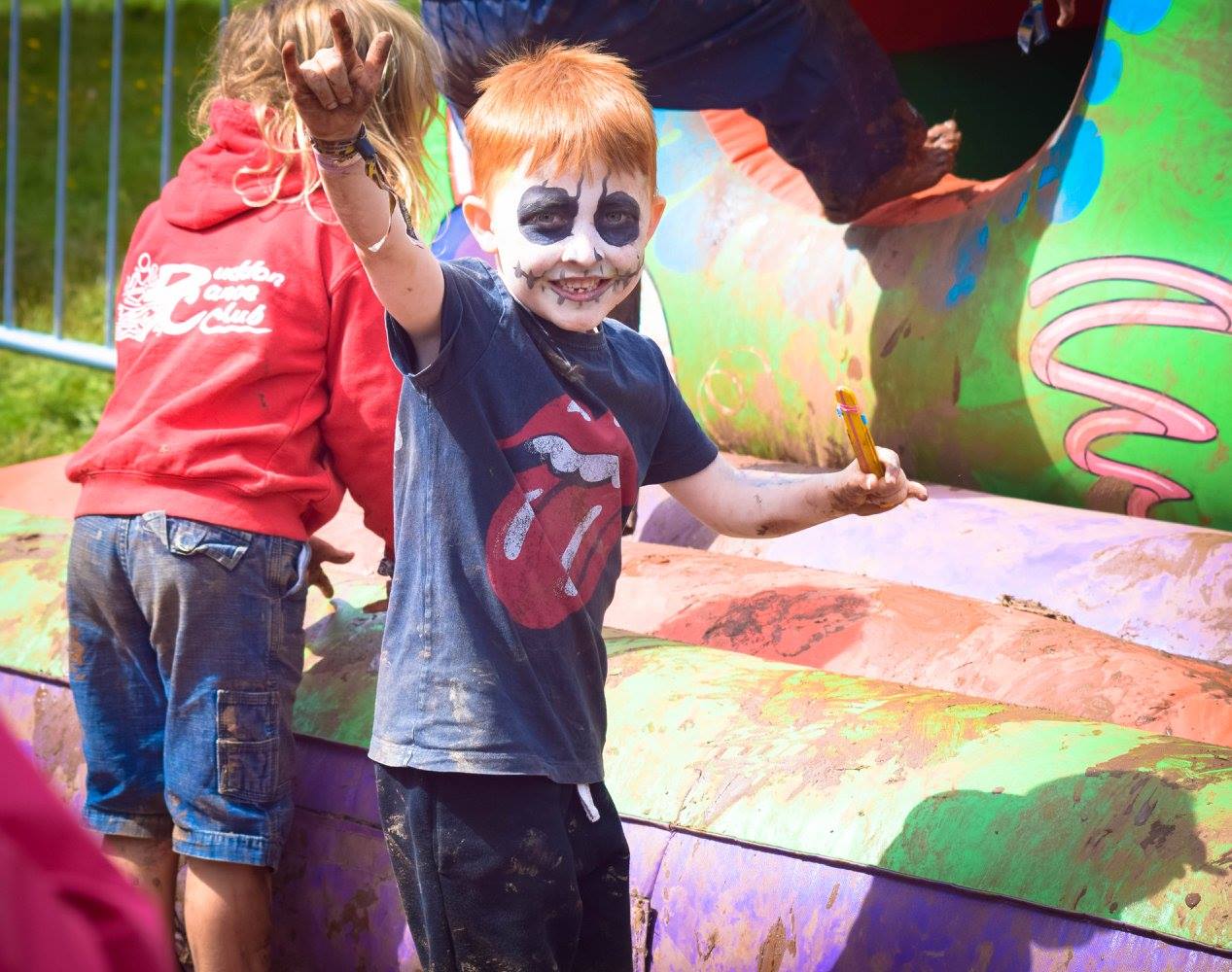 I would love to say that Scarlett and Sonny were incredibly close, but the long and short of it is they are not.  It’s not that they dislike one another. I think he just struggles to meet Scarlett on her level.  Scarlett doesn’t form friendships in the sense that we would consider a friendship to appear.  She plays in a completely different way to Sonny, as well as to other children.  Conversation isn’t something that she can engage in due to her speech and language disorder.  As a result of that Sonny and Scarlett do not have the friendship you would expect between children in the ‘normal’ sense.

What I have encountered repeatedly, is that when someone stares at Scarlett or passes comment, Sonny becomes incredibly upset. Despite the friendship distance between them he is decidedly protective over Scarlett. Especially when he can see people being outwardly judgemental or when their gaze rests upon Scarlett for longer than is appropriate.  I see him look and observe this. His little frame curls up and his freckled cheeks start to blush.  I can see him struggle with it and I feel very helpless. I wish I could deal with it by addressing the source of the distress, but I know in the long term, that isn’t a practical solution.

It is important to help your child respond to situations that may cause them mental stress by giving them the tools to identify them.  Emotion labelling is the first step to helping a young developing mind make sense of what is actually happening and what they are feeling. Identification is key!  Once you know what the feeling is you can apply it to the cognitive triangle. 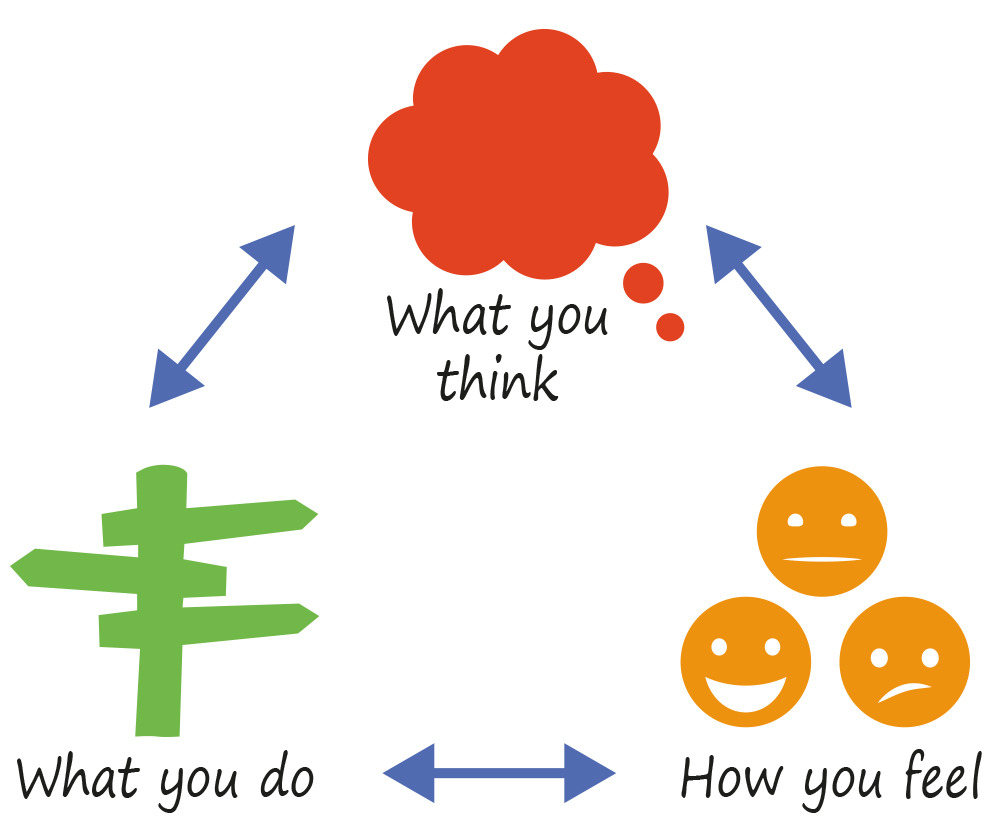 By identifying your emotional reaction and noting how intense it is, you are then able to address the thoughts and behaviour aspects of the triangle. Therefore, altering outcomes and reactions.  For example, if you are angry, a destructive reaction would be to smash something up. This is an instantaneous reaction which is detrimental to your well being.  By understanding your anger, and what triggers it, you’ll be able to push the pause button, and generate alternative thoughts.  Ultimately you gain a considerable amount of control over your thought and behaviour. 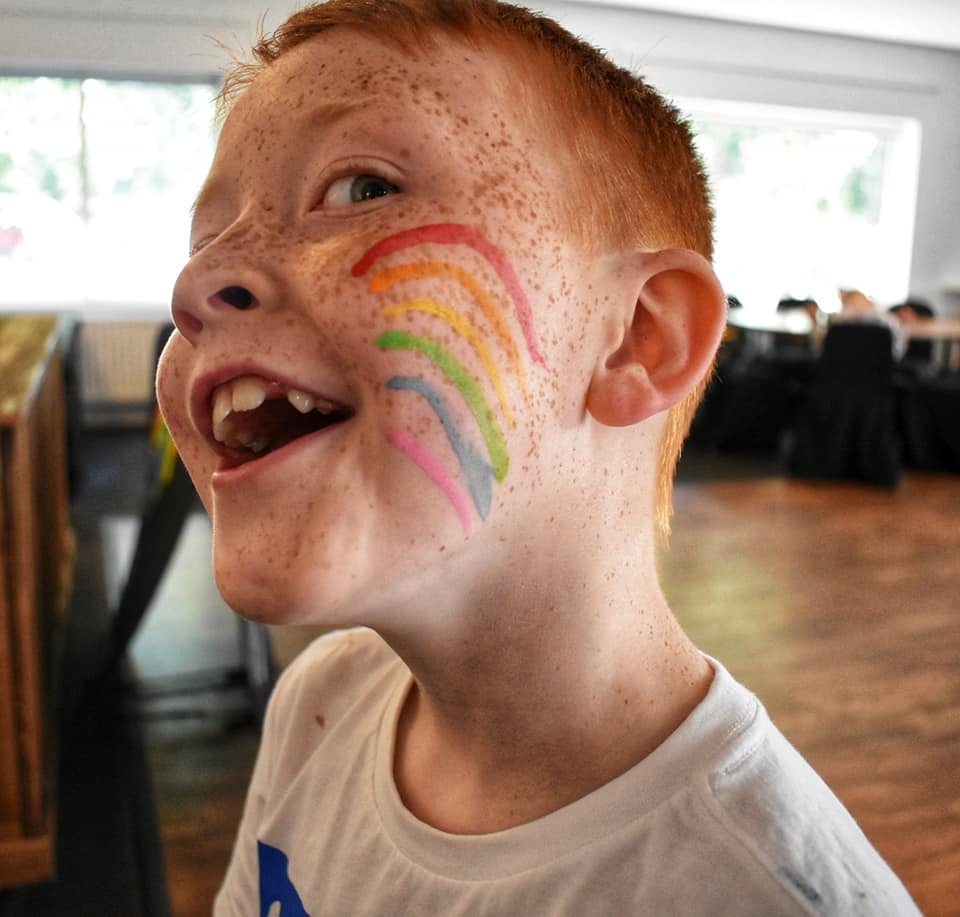 Emotions are defined as positive or negative experiences, that can be associated to patterns of physiological activity. Emotions produce different physiological, behavioural and cognitive changes.  It is important that I make clear that I am not a medical professional! But I have ‘done my time’ in terms of therapy, counselling, courses – with one clear view! To become more emotionally intelligent! Once you start to gain a greater understanding of your emotions and how they affect your behaviour, you can address how you react. And reaction is crucial.

Sonny really takes it to heart when somebody isn’t particularly nice or mindful of Scarlett and her ‘ism’s’. When we’ve spoken, he’s told me he feels anger and sadness. Some big old negative emotions there for an eight-year-old to comprehend, about a situation that is as complex as Scarlett is!  He is completely justified in experiencing those emotions, it’s learning to recognise and process appropriate responses. 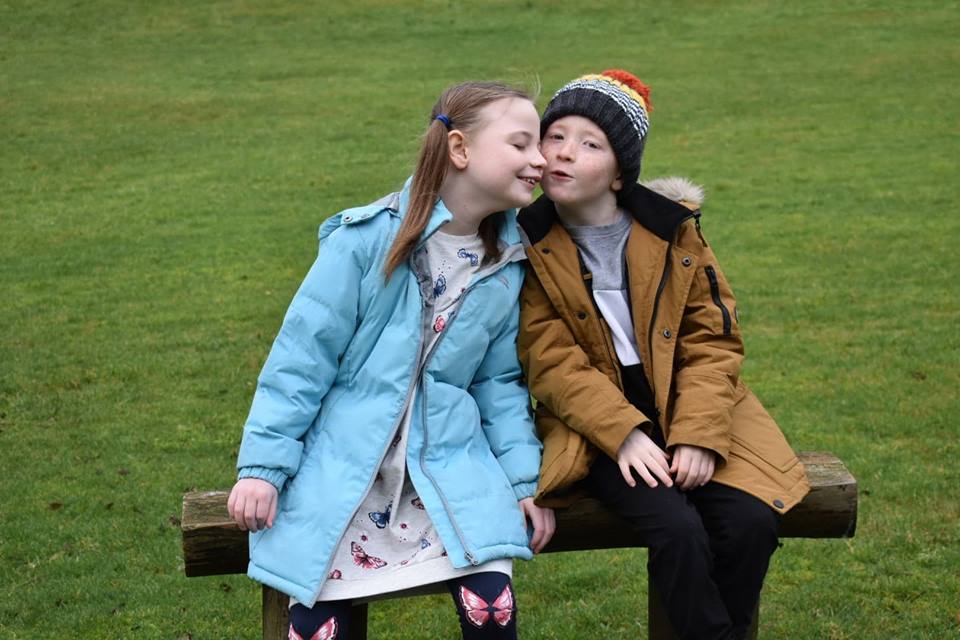 I always try to help him understand the others who’s glarey eyes are the creation of so much distress to him what they might be thinking!  I try to say “Little girls as beautiful as Scarlett just running around happy with her cane is not something that you see every day. Say, for example, if an elephant walked right past us now in the street we’d look wouldn’t we??”. Or for the alternative approach to it… I have in the past, not that I’m completely proud of it, asked people who stare if they would like to take a picture so it will last longer.

It is not a taboo subject, and I would never just ask him to accept it. It’s a completely open and honest topic in our home and I think Sonny is getting better at not feeling like he’s been punched in the gut when Scarlett is getting some unwanted attention.  By discussing with Sonny what other motives may be, its helping him to develop a greater understanding of other people. In turn, I feel he is more able to act with empathy.  Not just to Scarlett but also to other people. 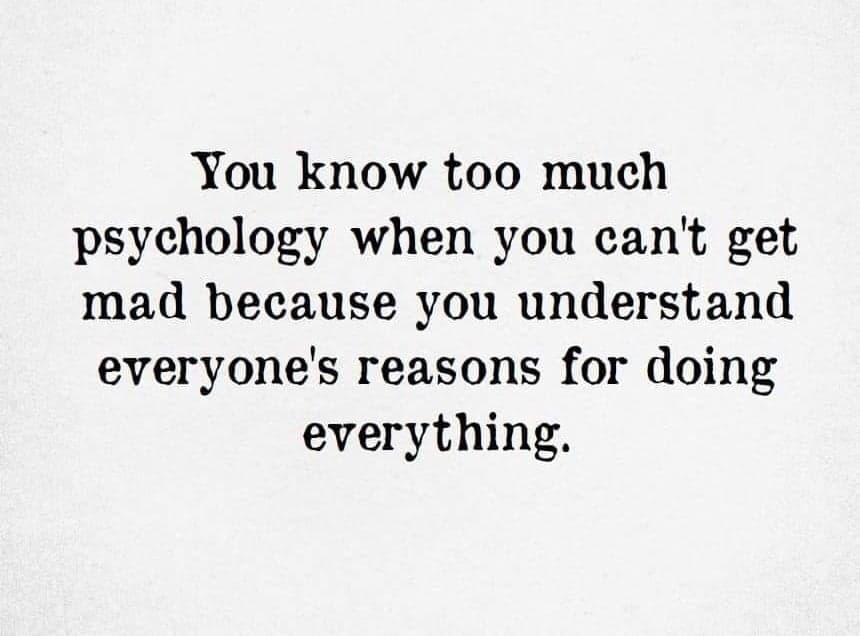 Male suicides have consistently accounted for approximately three quarters of all suicides in the UK since the 1990s. It has been directly linked to the fact that males feel they shouldn’t talk about their feelings or open up. Somehow it is seen as lacking in masculinity. Opening up is pivotal in making sure young minds are able to establish coping strategies from an early age.

I’m ever so proud of Sonny. Proud that, despite him not being particularly close to Scarlett, his emotional response evoked due to ill treatment demonstrates he clearly has a deep love for her.  It’s upsetting as a parent to see him agitated of course. But that little boy is feeling so much about his special big sister. It somehow makes me feel like I’ve done something right.

Sonny I am absolutely blessed to call you mine.

Read our other blogs for Children’s Mental Health week in our Stories Section.

Join the conversation in our Parent Network Facebook Group 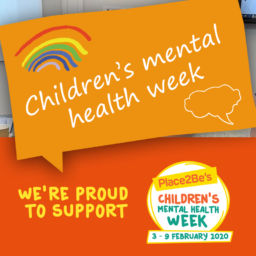 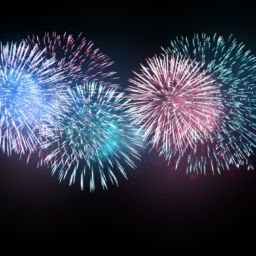 Bonfire Night! How I make it inclusive for all my family

From people I have spoken to, whether that be a parent or a child who has a visual impairment or… 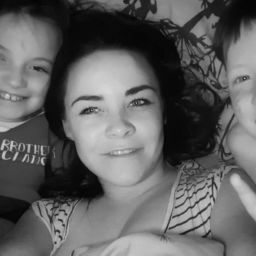 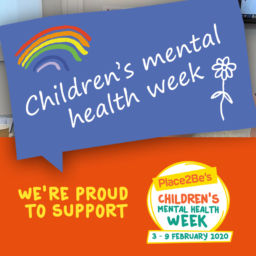