People are fascinated by the way in which Scarlett conducts herself, she seems to live among the fairies most of the time and is very happy in her own little world.  I love watching her, doing all the things that people often deem to be socially unacceptable, a whole different set of motivators that drive her, very different from other children of her age.  So full of joy, she finds happiness in the most simple of things, Scarlett is the first blind child I had ever encountered, her additional needs and her delay in speech all make her own personal Wonderland that much more of an enigma.

As a child and still to this day I love Alice’s Adventures in Wonderland, I think it is the very best example of literacy nonsense and I am a big fan of nonsense!  Oh, how I have longed and still do now, to fall through a Rabbit Hole, some days more than others, unadulterated escapism.  When I look at Scarlett and her unique ways I find her comparable to Alice, she has fallen through her own Rabbit hole and living in an existence for which I can only just being to scratch the surface to understand.  I have willed my little girl to talk, just so I can get a verbal descriptive glimpse of the world in which she exists. Her ability to talk has been doomed by the experts, so maybe being fully able to understand her has began to slip away…. So, I suppose I just have to accept that there are some things about my daughter and her fantasy world that I will never truly understand.

One of the main themes explored in Alice in Wonderland is growing up, I feel the text is very much representative of a child’s struggle to survive in a world of adults, or people who have through socialisation now lack open mindedness.  It is crap isn’t it? A world lacking in open mindedness, it is that mind set that will make the world crap for Scarlett, where ever her perception is that dictates where she resides is a very special gift that I am in constant fear of her loosing.  ‘People’ say that it is inevitable, this transformation into this so-called real world.

Scarlett’s developmental delay means that although she is most certainly growing up, the rate in which this is happening is much slower than that of a child who has their sight. Scarlett, like Alice approaches the world in a very innocent and unprejudiced way, how she bubbles over with affection for people, and her social and communication problems.

She has not learnt to fear strangers or act in a way with a certain etiquette, that people come to expect from a five year old child.  Of course it is very important to encourage a child to look after and care for themselves, and I am in no way saying that I should allow Scarlett to do what she wants just because she has a disability, I really am not saying that, I am very keen to help her reach her full potential.  But bloody hell, I think I’m more annoyed about the stupid set of rules that we have to adhere too, that adults just blindly follow, then we have these kiddies, and then we try to make them blindly follow these set of rules also.

I am finding it harder to get my daughter there… I am trying, but I do often think well she is happy doing her own thing, I hate the rules, why should I enforce them onto her, make her behave in a unnatural way.  I think she has got the right idea, she just does what makes her happy.

At the end of Alice’s adventures she has adapted and has lost most of the vivid imagination that comes with childhood. She is then far too mature to stay in Wonderland, the world of the children, and wakes up into the ‘real’ world.  I find that sad.  That point of realisation, I often think that once Scarlett climbs from out of her Rabbit Hole and I don’t know, perhaps understands that she is blind, she is disabled, she’s going to have some awful experiences in life as the world is very much closed minded and being led blindly by rubbish rule, social norms, acceptable behaviours.  Her very happy Wonderland will cease to exist.  Alice’s Wonderland, the same as Scarlett’s, is not a different world, its just the world through a different set of eyes.

I’d rather go and live in Scarlett’s Wonderland than bring her up to mine if I am honest, and thinking about how I can facilitate this desire of mine will be a life long quest. 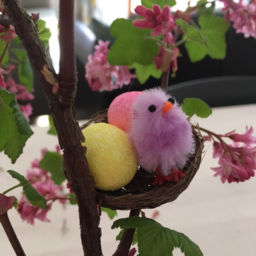 By Emily McMillan We have invited spring into our home with an Easter tree! We cut a branch of the…